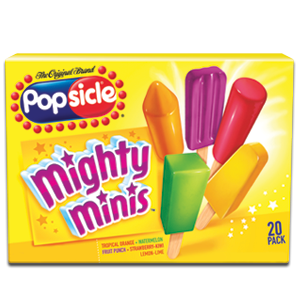 You want a little treat or maybe it is for the kids. Do you say, “Hey, let’s go get frosty ice structuring protein.”

Americans love ice cream and plunk down $25 billion every year to get their fix.

Quietly the big kahuna of ice cream, Unilever, has been slipping a mickey into your ice cream. A genetically modified mickey.

This biotech wonder comes from genetic modification and was formerly known as “antifreeze protein” until someone in Unilever marketing rubbed two brain cells together.

Unilever is the global British-Dutch company behind brands like Breyer’s Ice cream, Ben and Jerry’s, Good Humor, Klondike and Popsicle.

They are messing with your ice cream.

These trusted brands can no longer be trusted. You think you are eating a “natural” frozen dessert, right?

Up until recently, Breyer’s used to be milk, cream, sugar, vanilla (“all natural” according to them).

No, Virginia, sugar is not natural.

As we saw on 60 minutes and in Robert Lustig’s viral Youtube video, Sugar the Bitter Truth: My 60’s and 70’s memories include the Good Humor truck rolling regularly through the neighborhood. Bye bye Good Humor man, Unilever bought you too.

For the last few years my family has been subjected to the no-name ice cream guy driving  a junky van blaring out The Sting theme song, a monotonous tune that slowly bore a hole into my head. (Curiously, this ice cream guy has gone missing)

Pull out your ice cream stash from the freezer and read the package.

Look at the marketing on the front and the ingredients on the back. (Hmmm, how DO they achieve all than dreamy creaminess while skimming the fat from the cream?)

No, it doesn’t say that. You have to know the secret handshake to get that information out of Big Food.  Here’s the code:

Polydextrose (Why is “fiber” in your ice cream and Cocoa Pebbles? Because fake fiber has been added like polydextrose, inulin, or maltodextrin)

Corn Syrup and other sugars

Carrageenan (contains MSG, animal studies show it harms digestive tract and even can cause cancer. It is used as a thickener in place of real cream.) Wow! Popsicle has a slow-melting variety!

Now you know how that is possible.  Ice Structuring Proteins (aka ISP or Antifreeze proteins). Popsicle puts ISPs in lots of products. Remember Unilever owns Popsicle too.

Where else is Unilever sticking Ice Sculpturing Proteins. Keep an eye on your Breyer’s, Good Humor, Popsicle, Klondike, Ben & Jerry’s or someone might be slipping in a genetically modified mickey. (Bonus ingredient: Polysorbate 80 – can cause anaphylactic shock and infertility)

***Hang in there, I have some great REAL FOOD Ice Cream Recipes below***

You didn’t know Unilever was #1 in ice cream?

Unilever was created when a margarine company merged with a soap company to become a giant monopoly with large tentacles in many areas of consumer packaged goods and foods  (Hellman’s, Bertolli, Knorr, Vaseline, Axe cologne, and many soaps, lotions, deodorant and cleaning products). In 1993 Kraft sold its ice cream brands to Unilever.  Then came the flurry of cost-cutting measures and reformulations in your favorite brands.

By hiding behind brand names Unilever could be the biggest company you never heard of.  They hope that we think we are still buying from smaller companies that care about ingredients.

Did I mention Unilever dabbles in  biotech … Genetically Modified stuff?

(The previous link to Unilever’s GMO position worked yesterday and has now vanished. They’re on to me.)

When God made the ocean pout, these fish were equipped to dwell in icy cold ocean water because they had special proteins to protect against freezing (“antifreeze protein”).

Some bored people figured out this same protein had remarkable properties when used in making ice cream. The only problem is, with PETA and all, nobody was signing up for the contract to acquire truck loads of ocean pout just so Unilever could make creamy dreamy fat-free ice cream.

Unilever researchers discovered a way to use genetic modification to take the DNA from the ocean pout and insert it in a yeast.

The process is much cheaper and results in Ice Structuring Proteins that can be added to ice cream so that manufacturers can use fewer premium ingredients like real cream.

Unilever is laughing all the way to the bank by selling us stripped ice cream that is now “creamier, low fat, and less calories” because it uses genetically modified proteins. “GM yeast proteins are present” in the final product.

Unilever is also one of the world’s biggest buyers of fish. (!)

We don’t want to eat genetically modified foods in any form.

(Even when the government says they are safe)

Little human safety testing is done on GMO crops but they are linked to infertility, liver damage, allergies, disease and death.  What about autoimmune diseases?

Autoimmune diseases are on the rise and these never-existed-before-proteins, like Ice Structuring Proteins, are contributing to the problem.

While we are on the subject, we would all do well to avoid the following top 5 crops that are usually grown with GMO seeds:

These little toxic chemicals and GMO changes are popping into your trusted brands every day. If you choose to eat processed food, always check ingredients. If you can’t pronounce it, then you probably don’t want to eat it.

Is there a safe ice cream?

Not on the store shelves but you can make yourself a treat.  Just check your Google recipe box. that uses whole foods and it doesn’t require an ice cream maker.

Here’s another dairy-free treat to make at home: by Lea Valle of Paleo Spirit

Well Fed: Paleo Recipes for People who Love to eat

READY for a change?