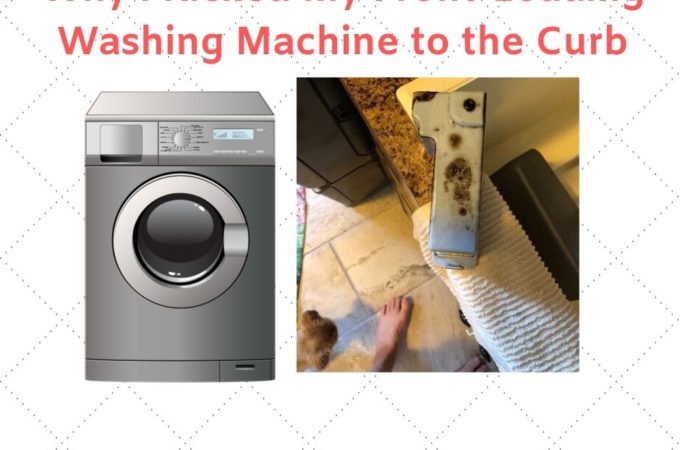 Why I Kicked my Front- Loading Washer to the Curb September 25, 2019Health NewsOff

For months my husband’s sinus symptoms were not getting better. His hormones were out of balance in unusual ways and his energy levels and mood were dropping. He easts a clean, real food diet, exercises, and takes supplements so none of his symptoms made sense to me.

The chronic stuffy nose and sinus problems led me to test him for mold toxicity. When his test came back positive we knew we needed to take immediate action. For a list of diseases and symptoms caused by mycotoxins, see the end of this article.

We discovered that our front-loading washing machine was full of mold. All of our clothing, towels and linens had been contaminated for months.

Yes, I knew to dry the gasket and leave the door open to let things air out. I never saw anything unusual when I did the wash and occasionally we ran a sterilizing cycle.

My husband started to complain that the clean laundry smelled moldy to him, yet I could not smell anything and I knew I was using a quality laundry soap, adding vinegar to the rinse, and drying in the dryer.

When his mold toxicity test came back positive we suspected that the washing machine was the source. My husband took out as many parts from the washing machine as possible to look for mold and he took these photos. He did not photograph the gaskets that are typically moldy too.

I also tested positive for mycotoxins

My MycoTox test results were actually more severe than my husband’s results but the only symptoms I had were minor. I had unusual tingling on my face occasionally and I was unable to take a full breath of air. The reason why he had more symptoms than I had is probably due to my ability to detox better. At the end of the article I list common symptoms associated with mold toxicity and talk more about the test kit that you can order.

You get the picture.

2016: “Complaints about funky, smelly mold in front-loading washers started out as online chatter years ago and wound up in the courts, with a preliminary settlement reached with Whirlpool and Sears in several class action lawsuits involving 5.6 million Whirlpool, Maytag, and Kenmore front-loaders made by Whirlpool. The parties eventually came to an agreement and now members of the class have until mid-October to collect a rebate or refund.” Consumer Reports

2016: “LG has agreed to a preliminary settlement of a class action lawsuit that alleges that LG front-loading washers were prone to developing mold, odors, or both. About 700,000 to 800,000 washers bought in the U.S. between 2002 and 2006 are affected, according to one of the lawyers representing consumers. The manufacturer denies any wrongdoing, and the court didn’t decide who’s right.” Consumer Reports

If you had the LG front-loader washer mold or mold-related odor problems you may have been compensated $35. That hardly begins to cover the health and remediation expenses and the cost of replacing the washing machine.

Did the class action lawsuits make a difference?

“The company (Electrolux) knew there was a problem as early as April 2007. And rather than recall the machines and let consumers know, they continued to sell the machines,” Wallace said.

“In our case, we have a service bulletin on this,” said attorney Ed Wallace, who represented people in the litigation against Electrolux Home Products.

2017: “A class action lawsuit has been filed against Electrolux, over mold problems with front-loading washing machines, which allegedly results in a smell that can permeate a consumer’s home, as well as potentially spreading mold or mildew onto clothes. According to the lawsuit, the manufacturer concealed design defects and knew that the Electrolux washing machines may fail to drain properly, failing to eliminate moisture following washing cycles, and fail to rinse away or remove dirt, detergent, fabric softeners and oils, which lead to the growth of mold and mildew.” source.

2009: Front-loading Whirlpool washers accumulate mold and mildew with a smelly odor that permeates clothes in the washing machines, according to a class-action lawsuit.

Whirlpool denied the claims, asserting that its front-loading washers are not defective and that any problems are because consumers failed to follow Whirlpool’s use and care instructions.

Our front-loading washing machine created a toxic environment in my home.

The development of mold and mildew in our front-loading washing machine led to a variety of health and safety issues. It caused mold toxins to spread throughout the home. As a result, when alarming health symptoms started popping up we began investigating.

Lab tests showed that we had several types of mold toxins in our bodies, yet our home had no signs of water damage, leaks or mold. Once mold was found in our front-loading washer we sprung into action and this took a great deal of time and money to address the problem.

This Has Been a Known Problem for 14 Years

2005 “This morning I did a little Internet searching and happened upon maytagproblems.com (this site is no longer valid). A little more searching led me to ConsumerAffairs.com where I learned that Maytag has just settled a class action lawsuit over the Neptune.  This comment was typical of the complaints I saw.”

The stench was awful,” said Anne of Treasure Island, Fla., in a complaint to ConsumerAffairs.Com. “I was told to wash the boot and the gasket in the door once a week. Use only a certain detergent. Wipe the door and the inside down with bleach once a week and then leave the door open for 2 hours after each washing.”

We Cleaned the Gaskets, Removed Dispensers, Left the Door Open and we still got Mold

Manufacturers are blaming the homeowners and accusing them of not following care instructions. I cleaned the machine periodically and I left the door open, which is not safe if young children are in the home.

Front-loading washers with the boot and gaskets required to hold the water in are just a bad idea and will easily create mold growth.

What I Do Now

We bought a top-loading washer, but it has so many plastic parts and dispensers, I worry that we will have mold growing in those areas again so I work hard to prevent that.

After every load of laundry I take all the dispenser parts out and throughly dry every part of the washing machine. I spray it with an essential oil spray with Thieves and alcohol when everything is dry and I leave the lid up.

It took three months for my husband to feel back to normal after the mold toxicity. Months of cleaning and remediating our home, diffusing essential oils with a waterless diffuser, taking certain supplements to bind mold toxins and increase our detoxification abilities.

We bought a special air purifier and now we always make sure that there is never the opportunity for moisture to allow mold to grow. If there is any moisture or water in the home for more than 48 hours, we know that mold will grow.

Detoxing is critical if you are dealing with mold.

Here’s my favorite supplements with a 15% discount.

Remediate your crawlspace or basement.

We live in Tennessee. They like to build houses with crawlspaces. Ours was flooding periodically and we had to call in the experts. If you are in Nashville, I can give you a great recommendation. This company sprayed down the area with a mixture of hydrogen peroxide and essential oils and installed an amazing, huge dehumidifier in the crawlspace. Here’s the brand we got for our crawlspace.

My best advice is to keep your old top-loading washer with the agitator and hope it keeps on working for years to come.

Never clean mold with bleach and never use bleach period.

Chlorine bleach is a hazardous chemical and does not belong in your home. A scientific study showed that when bleach and soap mixes, dangerous volatile compounds are formed, including carbon tetrachloride, a probable human carcinogen.

Using bleach even once a week is linked to fatal lung disease. It could increase a person’s chance of developing chronic obstructive pulmonary disease (including emphysema, chronic bronchitis and chronic asthma) by nearly a third. Source.

Using bleach only works on germs on non-porous surfaces like glass and metal. Mold spores are not just on the surface, they have hyphae (like roots) that grow into porous materials. Attempting to clean walls, wood, fabric, and plastic with bleach is likely to make the problem worse. If your washing machine does not drain properly it will grow mold. Mold releases spores and mycotoxins that get into your clean laundry and spread throughout your home.

The best thing I can recommend is to get rid of your front loading washer if you are concerned. Always disassemble the soap dispenser and any plastic parts that are removable. Dry every part of the washing machine possible.

How to Test for Mycotoxins

As a nutritionist, I can order the at-home urine collection kit for you. It is easy to collect the specimen and send it to the lab. Great Plains Laboratory is the laboratory I recommend. Here’s a little information on this test from them:

Mycotoxins are some of the most prevalent toxins in the environment.  Mycotoxins are metabolites produced by fungi like mold, which can infest buildings, vehicles, and foodstuffs.

A majority of mycotoxin exposures are through food ingestion or airborne exposure.  In the European Union, 20% of all grains harvested have been found to be contaminated with mycotoxins.  Unfortunately, mycotoxins are resistant to heat and many processing procedures.

Fungi are able to grow on almost any surface, especially if the environment is warm and wet.  Inner wall materials of buildings, wall paper, fiber glass insulation, ceiling tiles, and gypsum support are all good surfaces for fungi to colonize.

These fungi then release mycotoxins into the environment causing symptoms of many different chronic diseases.

Diseases and symptoms linked to mycotoxin exposure include

Advantages of the Mycotox Profile test from Great Plains Laboratory

If you have done a MycoTOX Profile and the results show moderate to high levels of mycotoxins there are things you can do to help the body eliminate the toxins and prevent future exposures.

The first step is to eliminate or reduce exposure to mold.  The majority of exposures result from contaminated food, skin contact, and inhalation of spore-borne toxins, which is often caused by water-damaged buildings.  Inhalation of spore-borne toxins can be limited by detecting and eliminating damp and moldy environments, both indoor and outdoor.

Mold can be controlled by cleaning and drying after water intrusion; having proper ventilation for showers, laundry, and cooking areas; making sure that windows, roofs, and pipes are free of leaks; and by controlling humidity levels.

After moisture problems are alleviated it is recommended that mold removal be performed by a licensed contractor.

Attempts to remove mold may cause mold spores to scatter and spread to other areas.  In addition, treating mold without proper ventilation could result in health problems caused by the release of mycotoxins from the mold spores.