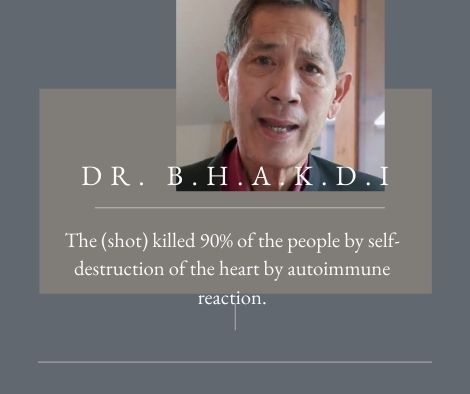 On C~ vaccines: why they cannot work, and irrefutable evidence of their causative role in deaths after vaccination December 30, 2021Health NewsOff

Autoimmune attack is triggered by vaccines. Ninety percent of deceased had similar pathological findings that prove the vaccine killed 90% of the people by self-destruction of the heart by autoimmune reaction. Four of the fifteen were only vaccinated once. Killer lymphocytes have invaded the heart and lungs of the vaccinated people.

On COVID vaccines: why they cannot work, and irrefutable evidence of their causative role in deaths after vaccination

This text is a written summary of Dr. Bhakdi’s and Dr. Burkhardt’s presentations at the Doctors for COVID Ethics symposium that was live-streamed by UKColumn on December 10th, 2021. The two presentations can be viewed at the very beginning of the video recording of the symposium.

Dr. Bhakdi has spent his life practicing, teaching and researching medical microbiology and infectious diseases. He chaired the Institute of Medical Microbiology and Hygiene at the Johannes Gutenberg Unversity of Mainz, Germany, from 1990 until his retirement in 2012. He has published over 300 research articles in the fields of immunology, bacteriology, virology and parasitology, and served from 1990 to 2012 as Editor-in-Chief of Medical Microbiology and Immunology, one of the first scientific journals of this field that was founded by Robert Koch in 1887.

Dr. Arne Burkhardt is a pathologist who has taught at the Universities of Hamburg, Berne and Tübingen. He was invited for visiting professorships/study visits in Japan (Nihon University), the United States (Brookhaven National Institute), Korea, Sweden, Malaysia and Turkey. He headed the Institute of Pathology in Reutlingen for 18 years. Subsquently, he worked as an independent practicing pathologist with consulting contracts with laboratories in the US. Burkhardt has published more than 150 scientific articles in German and international scientific journals as well as contributions to handbooks in German, English and Japanese. Over many years he has audited and certified institutes of pathology in Germany.

We herewith present scientific evidence that calls for an immediate stop of the use of gene-based COVID-19 vaccines. We first lay out why the agents cannot protect against viral infection. While no positive effects can be expected, we show that the vaccines can trigger self-destructive processes that lead to debilitating illness and death.

Why the vaccines cannot protect against infection

A fundamental mistake underlying the development of the COVID-19 vaccines was to neglect the functional distinction between the two major categories of antibodies which the body produces in order to protect itself from pathogenic microbes.

These antibodies are thus on site to meet air-borne viruses, and they may be able to prevent viral binding and infection of the cells.

Vaccines that are injected into the muscle – i.e., the interior of the body – will only induce IgG and circulating IgA, not secretory IgA.

Such antibodies cannot and will not effectively protect the mucous membranes from infection by SARS-CoV-2. Thus, the currently observed “breakthrough infections” among vaccinated individuals merely confirm the fundamental design flaws of the vaccines. Measurements of antibodies in the blood can never yield any information on the true status of immunity against infection of the respiratory tract.

The inability of vaccine-induced antibodies to prevent coronavirus infections has been reported in recent scientific publications.

The vaccines can trigger self-destruction

A natural infection with SARS-CoV-2 (coronavirus) will in most individuals remain localized to the respiratory tract.

In contrast, the vaccines cause cells deep inside our body to express the viral spike protein, which they were never meant to do by nature. Any cell which expresses this foreign antigen will come under attack by the immune system, which will involve both IgG antibodies and cytotoxic T- lymphocytes. This may occur in any organ.

We are seeing now that the heart is affected in many young people, leading to myocarditis or even sudden cardiac arrest and death.

How and why such tragedies might causally be linked to vaccination has remained a matter of conjecture because scientific evidence has been lacking. This situation has now been rectified.

Histopathologic analyses have been performed on the organs of 15 persons who died after vaccination. The age, gender, vaccination record, and time of death after injection of each patient are listed in the table on the next page. The following points are of utmost importance:

But our subsequent histopathological analyses then brought about a complete turnaround. A summary of the fundamental findings follows.

Histopathologic findings of a similar nature were detected in organs of 14 of the 15 deceased. Most frequently afflicted were the heart (14 of 15 cases) and the lung (13 of 15 cases). Pathologic alterations were furthermore observed in the liver (2 cases), thyroid gland (Hashimoto’s thyroiditis, 2 cases), salivary glands (Sjögren`s Syndrome; 2 cases) and brain (2 cases).

A number of salient aspects dominated in all affected tissues of all cases:

1. inflammatory events in small blood vessels (endothelitis), characterized by an abundance of T- lymphocytes and sequestered, dead endothelial cells within the vessel lumen;

2. the extensive perivascular accumulation of T-lymphocytes;

3. a massive lymphocytic infiltration of surrounding non-lymphatic organs or tissue with T- lymphocytes.

Lymphocytic infiltration occasionally occurred in combination with intense lymphocytic activation and follicle formation. Where these were present, they were usually accompanied by tissue destruction.

This combination of multifocal, T-lymphocyte-dominated pathology that clearly reflects the process of immunological self-attack is without precedent. Because vaccination was the single common denominator between all cases, there can be no doubt that it was the trigger of self-destruction in these deceased individuals.

Histopathologic analysis show clear evidence of vaccine-induced autoimmune-like pathology in multiple organs. That myriad adverse events deriving from such auto-attack processes must be expected to very frequently occur in all individuals, particularly following booster injections, is self- evident.

Beyond any doubt, injection of gene-based COVID-19 vaccines places lives under threat of illness and death. We note that both mRNA and vector-based vaccines are represented among these cases, as are all four major manufacturers.