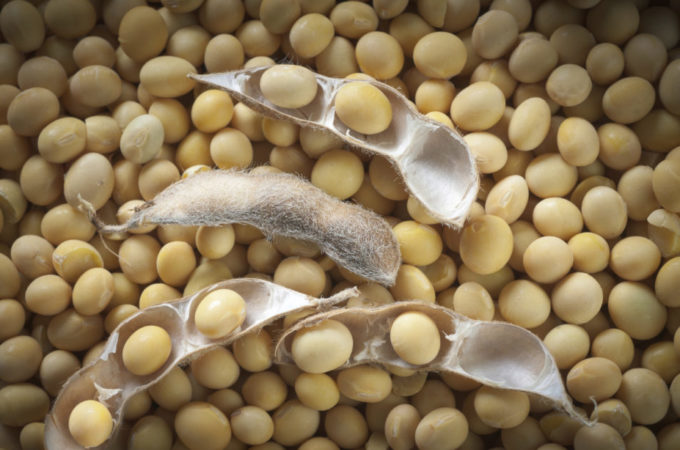 Many people enjoy dining at sushi restaurants.  Part of the experience is sharing a steaming bowl of edamame as an appetizer.  These young, delicate green pods are lightly boiled in salt water and are served in a simple bowl with no accoutrements.  To enjoy edamame, squeeze the beans out of the pod directly into your mouth.  The pod itself is fibrous, fuzzy and altogether unpalatable, but the beans inside are tasty with a bit of a nutty flavor.  Edamame looks like a cross between a lima bean and a green pea.  The beans in the pod can be added to salads and stir fry.

In the United States, there is a perception that the Japanese have attained a higher level of health than North Americans.  Many point to edamame and other soy foods as a contributing factor.  We gobble up soy foods in the name of health, filling our grocery carts with edamame, soy burgers, soy sausage, soy “chicken nuggets”, soy lasagna, miso, tofu, soy nut butter, soy nuts, and tempeh.  There are a variety of not-milk soy products like soy milk, cheese, yogurt and ice cream.

Soy has a healthy aura

The healthy aura emanating from this little green legume draws the vegetarian, vegan and omnivore alike to incorporate soy into the diet whenever possible.  The chemical composition is noteworthy as Phyllis A. Balch writes in her book, Prescription for Nutritional Healing, “All soybean products, such as tofu and soymilk, are complete proteins.  These foods have high levels of fiber, and soy has been found to be the healthiest source of protein, more so than any other food” (Balch, 2006, p. 7).

On the other end of the spectrum are people like Kaayla Daniel, author of the book, The Whole Soy Story, and website of a similar name.  The home page of the website spells out Kaayla Daniel’s position: (Daniel, 2005)

Sally Fallon and Mary G. Enig have a fully referenced (72 sources) paper, “Newest Research on Why You Should Avoid Soy,” which outlines a number of reason for avoiding soy.  Here is a sample of reasons listed in their paper:

Let’s take a look at soy and the soy industry so that we can tease out the truth.

Soy slowly gained acceptance in America.  In 1770 Ben Franklin sent soybeans to America recommending that they be grown here.  It wasn’t until 1935 that soybean crops were being grown for food oil.  For years the soy protein that was left over from the process of manufacturing oil was used to feed animals.  It wasn’t until World War II that soy protein was eaten as a food because it was a cheap source of protein.  To increase sales, soy was marketed as an upscale health food backed by industry funded studies (Daniel, 2005).

Analysis of the soybean shows that it is a good source of molybdenum, protein, iron, calcium, phosphorus and fiber Soybeans contain Omega-3 fatty acids and phytosterols.  (Murray, 2005, p.369).

Fresh soybeans cooked in the pod are called edamame.  Tofu is a product made from soybeans, water and a curdling agent that precipitates out the soybean curd.

Fermented soy products like miso, soy sauce and tempeh are the soy foods eaten in small amounts by Asians.  Asians traditionally have not consumed the engineered soy products like soy burgers, soy chicken and soy cheese.  This is an important distinction as we study the longevity secrets of the Asian culture.

Soybean meal is a product manufactured from soybeans.  One way to make soybean meal is to use an expeller press process to smash the beans.  The heat generated in the process is like a pressure cooker, changing the nature of the soybean.  Most of the processed soy goes through a different process which, in the end, yields soy protein and crude oil for further processing.

In processing, soybeans are cracked, cooked, smashed, “washed” with hexane to get rid of the natural oil, steam-cleaned to get rid of the hexane (it still leaves 40% on the soy), then it is further steamed and toasted to evaporate the rest of the hexane. The result is a chemically rendered, defatted flake. It can no longer be recognized as a soy bean (Environmental Protection Agency [EPA], 1995).

Can unprocessed soy be safely consumed?

Soy protein is so highly processed that it is easy to see why it is not recommended in a whole food diet.  The question that begs to be asked is, “Can unprocessed soy be safely consumed?”  Even if we were to set aside the issue of antinutrients, we must consider the issue of genetic modification.  Genetically modified organisms (GMOs) are created when foreign genes are artificially inserted into the DNA of food crops or animals (Smith, 2010).  In 1996 genetically modified soybean comprised 7% of total U.S. soybean crops, and that number grew to 92% in 2008 (Lemaux, 2009).

“Genetically Modified Organisms (GMOs) are the result of laboratory processes which artificially insert foreign genes into the DNA of food crops or animals. Those genes may come from bacteria, viruses, insects, animals or even humans. Although banned by food manufacturers in Europe and elsewhere, the FDA does not require any safety evaluations. Most Americans say they would not eat GMOs if labeled, but the U.S. does not require labeling. GMOs are not safe, but have been in the food supply since 1996 and are now present in the vast majority of processed foods in the US.  Genetically modified foods have not been shown to be safe to eat.” (Institute for Responsible Technology, 2010).

Can we eat organic soy?

Although organic soybeans are GMO-free by definition, it is very likely that GM soybeans have cross-contaminated the organic soybean fields.  Soybeans are self-fertilized and very few bees visit the soybean plant (McGregor, 1976). This is important to know when considering the impact that genetically modified crops have on organic crops or other non-genetically modified crops. Since soybeans are open-air pollinated, it is impossible to guarantee that neighboring organic crops have not be genetically contaminated.

Pollen drift occurs when pollen travels by wind, insects, birds and trucks.  The pollen might come from a farm nearby or a farm miles away.  It is nearly impossible for farmers to guard their organic crops from cross pollination (Flood, 2003).

GMO soybeans are not safe

GMO soybeans have not been fully tested for safety.  Research would be costly and studies that have been conducted did not look at the majority of the potential problems. In the UK soy allergies increased by 50% after the introduction of GM soy, yet there were never any follow up studies conducted (Smith, 2005).

BanGMfood.org is a project established by GMWatch, an independent organization and lobby group, attempting to counter the propaganda from the soybean industry.  In the fully-referenced pamphlet 10 Reasons Why We Don’t Need GM Foods (n.d.) the authors write:

Genetic modification is a crude and imprecise way of incorporating foreign genetic material into crops, with unpredictable consequences.  The resulting GM foods have undergone little rigorous and no long-term safety testing, but animal feeding tests have shown worrying health effects.  Only one study has been published on the direct effects on humans of eating a GM food.  It found unexpected effects on gut bacteria, but was never followed up.

Another area to consider when evaluating the value of soy as a food is the phytoestrogen content of soybeans.  Phytoestrogens, like isoflavones in soy, mimic estrogen in the human body.  These plant estrogens can have adverse effects, contributing to cancer, suppressing reproductive function, and interfering with infant sexual differentiation and development (Daniel, 2005).

Soy-based infant formula accounts for 25% of the formula market in the United States (Bhatia & Greer, 2008).  Researchers found that relative to body weight, infants fed only soy-based formula are exposed to a dose of isoflavones that is 5-10-fold higher on a body-weight basis than the amount that has been shown to have a significant hormonal effect on adult women consuming soy foods (Setchell et al., 1998).  It is estimated that an infant fed soy formula receives the estrogen equivalent of at least 5 birth control pills per day (Irvine et al, 1995).

The soy phytoestrogens, the isoflavones, interfere with the normal sexual development of children.  Fallon and Enig (n.d.) report, “an alarming number (of girls) are entering puberty much earlier than normal, according to a recent study reported in the journal Pediatrics.  Investigators found that 1% of all girls now show signs of puberty, such as breast development or pubic hair, before the age of three; by age eight, 14.7% of white girls and almost 50% of African-American girls have one or both of these characteristics.”  The authors go on to say that the most significant association with premature sexual development was soy infant formula.

After reviewing both sides of the soy story, I am strongly opposed to eating unfermented, non-organic soy or feeding soy-based formula to infants.  I believe that even fermented organic soy foods should be enjoyed on a limited basis.  As the use of genetically modified soy continues to grow we will see an increase in cross-pollination and contamination of the organic soybean crops.

Smith, J. (2005). Rammed down our throats. Retrieved from www.seedsofdeception.com/Documentfiles/93.pdf