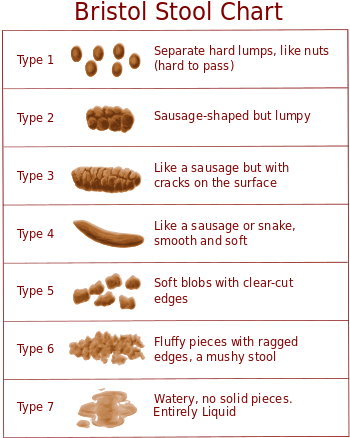 Dr. Lawrence Wilson MD says, “At least half the large bowel (about 1 foot long) must empty every day. The colon is about two feet long or more, in most people. The ascending colon may be liquid and its contents are not ready for evacuation, so that is why about half should be ready for evacuation daily. It does not matter if this occurs in one, two or more bowel movements during the day.”

This chart is a medical aid designed to classify the form of human feces into seven groups.  It was developed by Heaton and Lewis at the University of Bristol and was first published in the Scandinavian Journal of Gastroenterology in 1997.  The form of the stool depends on the time it spends in the colon. We should be having a bowel movement at least once or twice a day.

What type of stools are best?

Too fast – not absorbing nutrients

How to Test Transit Time